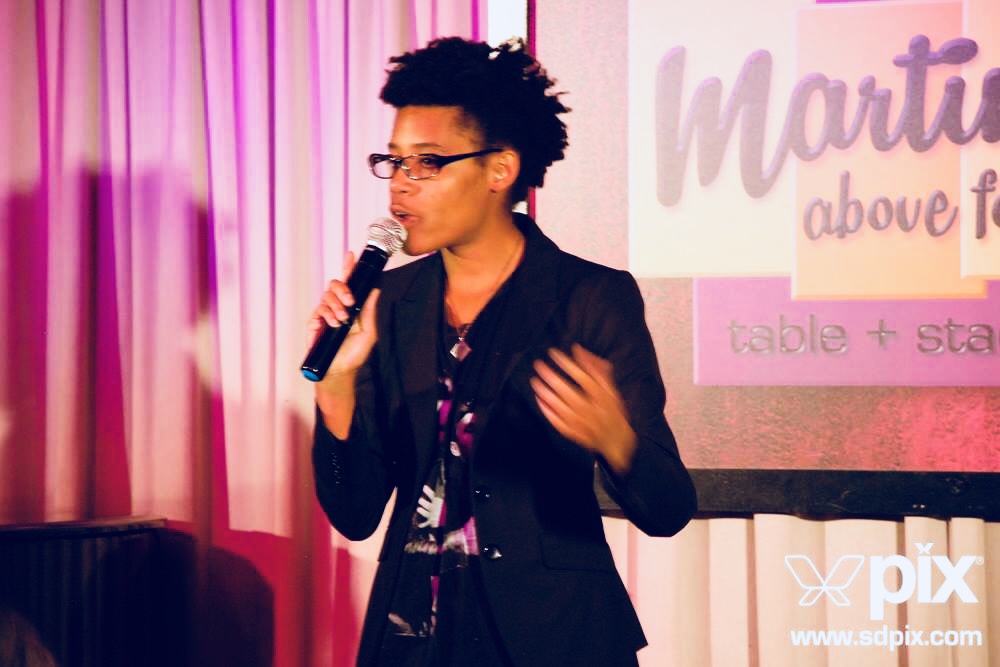 Where comedy meets community : Hillcrest Comedy With Jaleesa Johnson is a new monthly comedy show that takes place on the 3rd Tuesday of every month! Headliners include comedians from CONAN, Laughs On Fox, Comedy Central & just all-around amazing local talent. The first show was back in January of this year, and all shows since then have sold out, among receiving very promising feedback & reception thus far from the audiences!

Below are some of the diverse audiences coming in for the show and enjoying themselves : 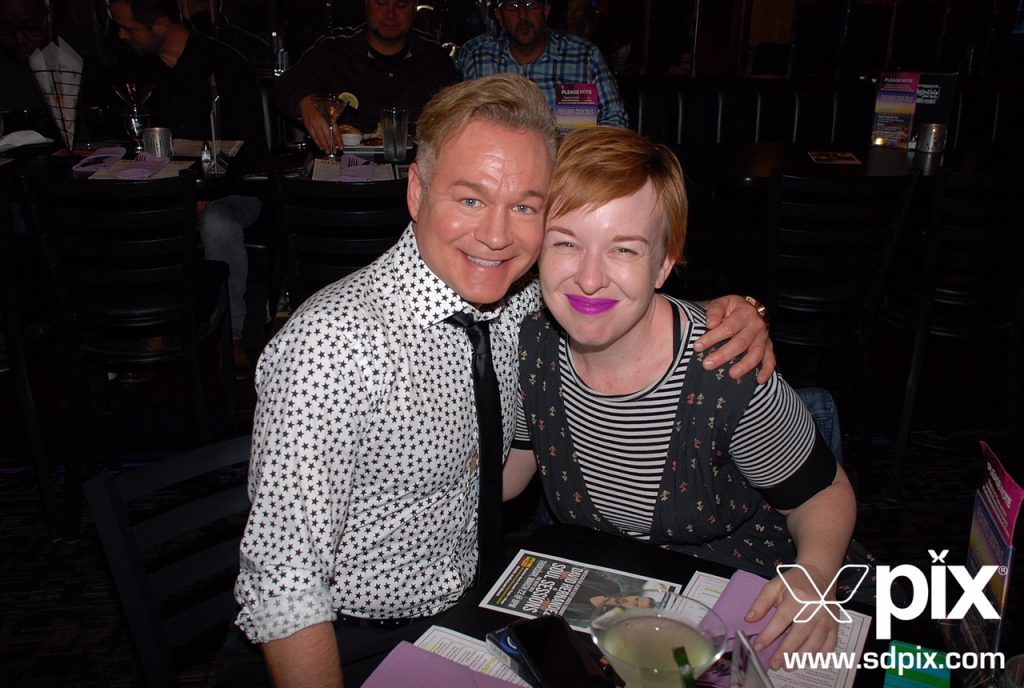 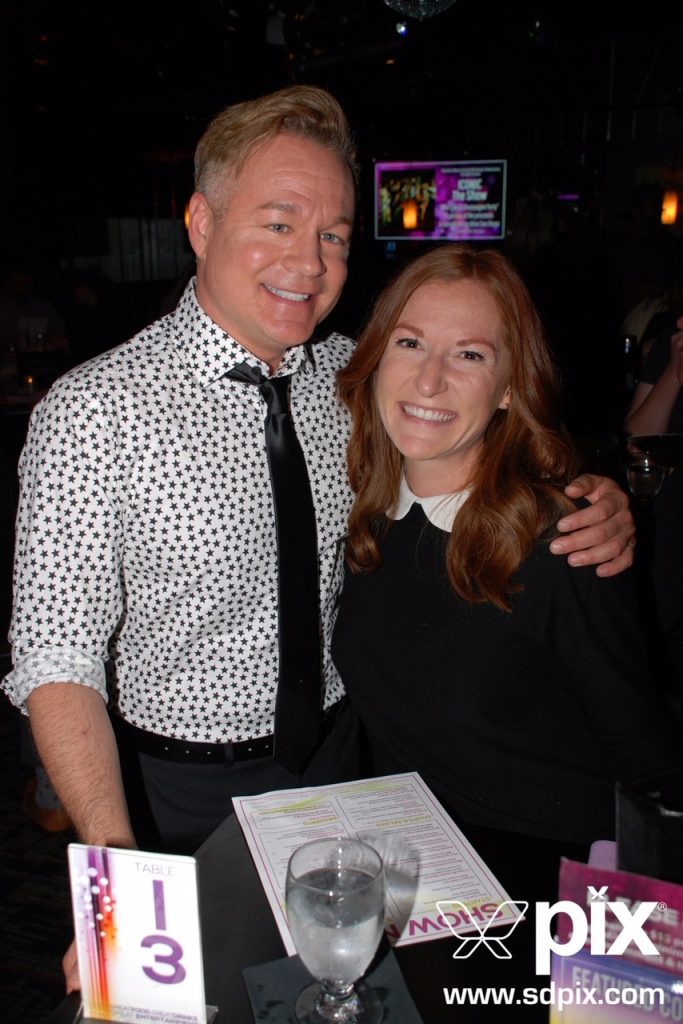 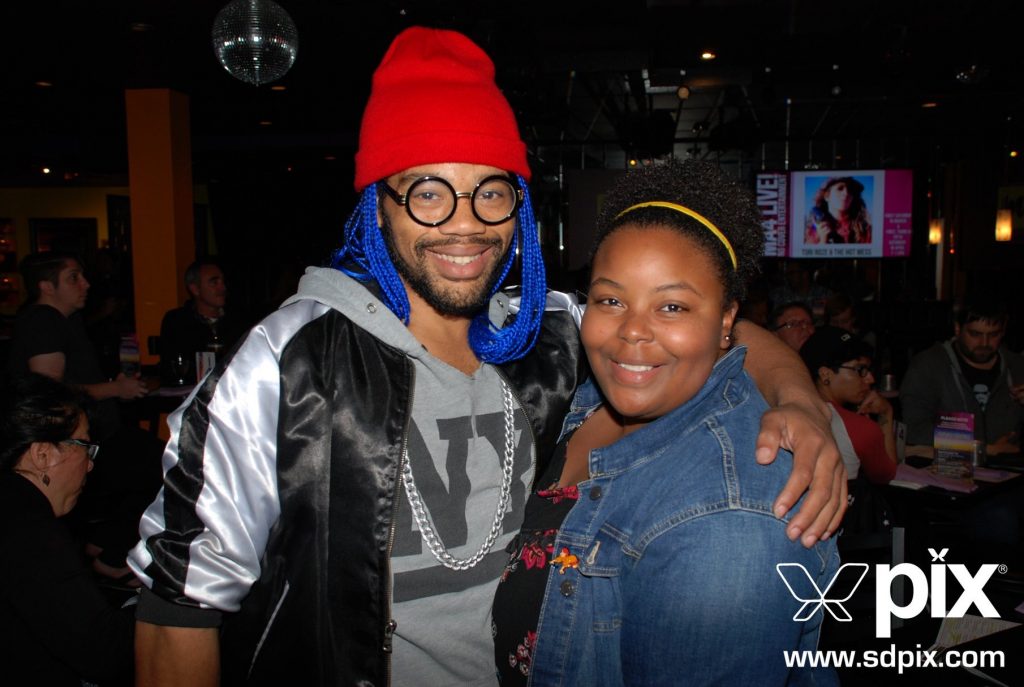 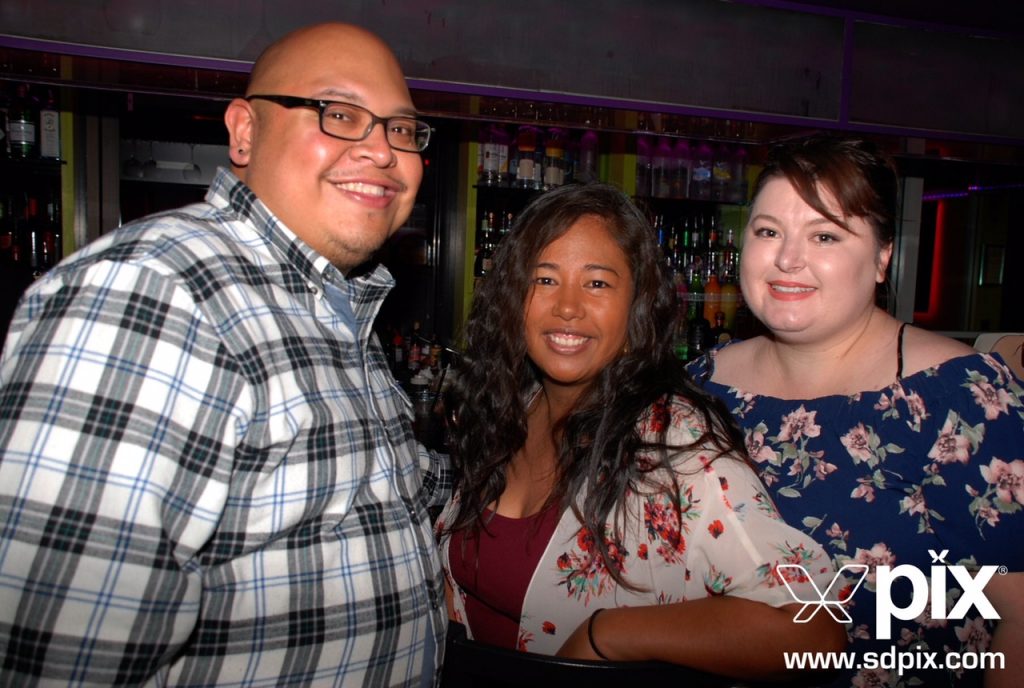 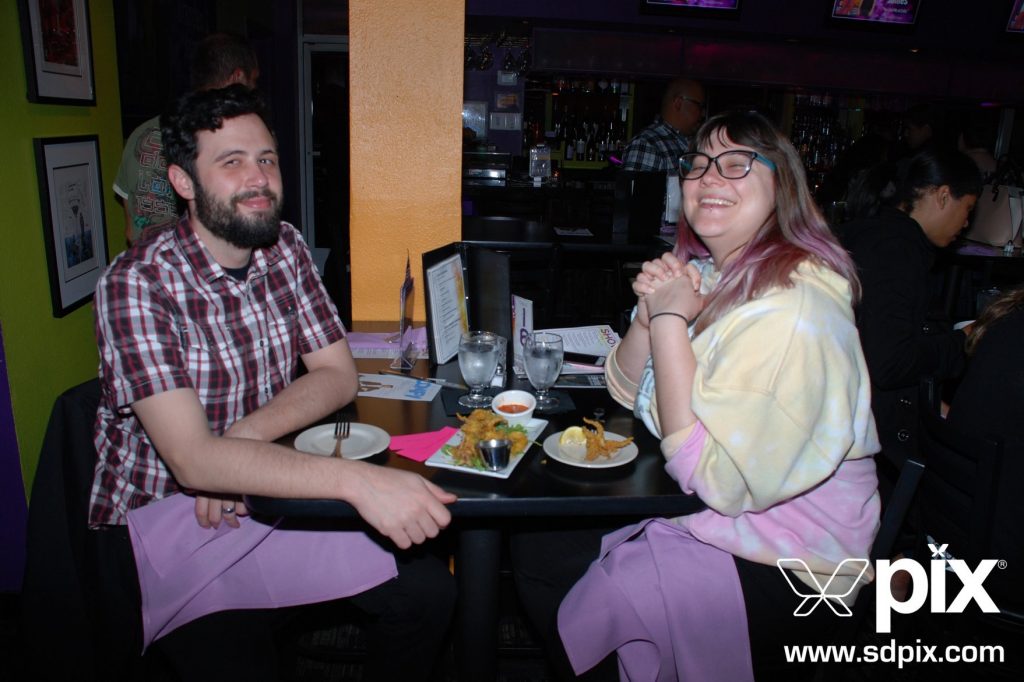 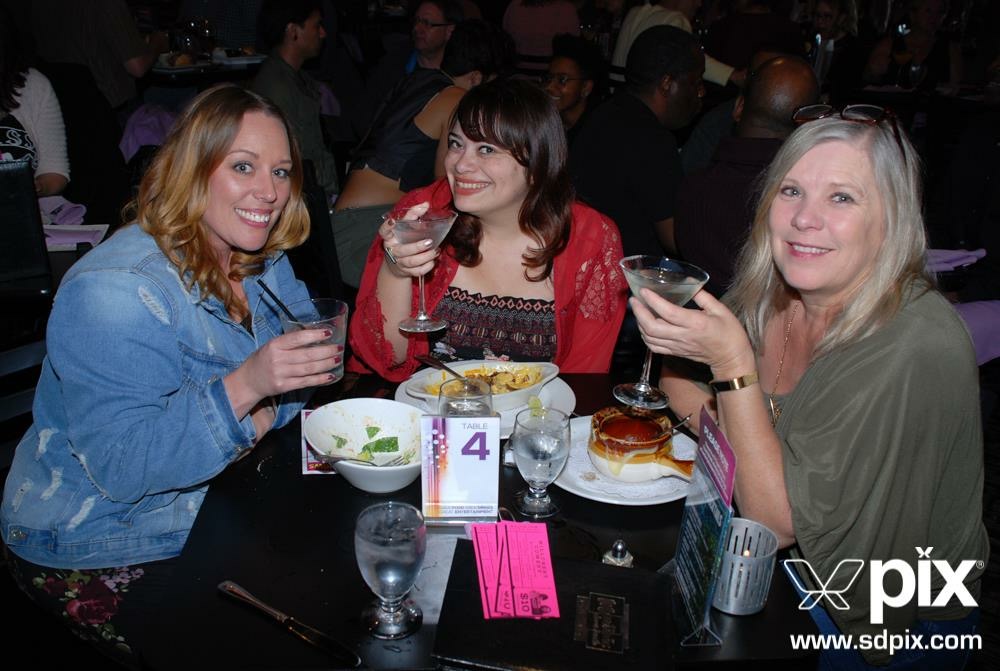 Here I am with a couple of sweet neighbor friends who enjoyed it so much back in January at the first! Thanks again to SD Pix for the great photos.

I had the wonderful opportunity to sit down with the very talented Jaleesa Johnson to get the inside scoop on the story behind her inspiration for getting this show created. Johnson, 25, is a very friendly, openly bisexual and down-to-earth stand-up comedian who has been doing comedy in San Diego for three years.  She is originally from New Orleans, Louisiana. She has been at it consistently but feels that this last year has started to truly be her year of success and is consistently been getting good gigs and shows.

She shared with me that it has been a long journey of truly many ups and downs. Before comedy, she tried different avenues of creativity. She did painting for many years and became pretty good at it, but it still wasn’t one of her passions. She got inspired to delve into stand-up comedy when she went to an open-mic show at Lestat’s Coffee House. She was truly floored and inspired by comedian Leo Flowers. “What a cool guy. Whatever he does, he must be so happy,” Johnson reminisces on her impression of him. He was her favorite.

“Let me get edgy and also not hurt anyones feelings,” is one of Johnson’s go-to styles with comedy. She feels she really struggled a lot in the beginning but now she has truly come into her own and has her different techniques down.  Politics is among her favorite topics and not just in comedy, but also in podcasting. Johnson also helps lead a pretty successful podcast called Mueller, She Wrote. They have reached 55,000 downloads so far. It is a weekly podcast that follows the mysteries of the Mueller investigation into Russian collusion.

As far as how Hillcrest Comedy comes to fruition, Johnson shares with me how she got into contact with David Jansen, the Director of Entertainment at Martini’s.  Martini’s referred another venue to book Johnson, and one day last year Johnson emailed them thanking them for the reference. Johnson performed once at Martini’s beforehand in 2016. She told them in the email that their venue is amazing and she would love to do a show there again. David agreed and invited her to come to a show there. Fall 2017 is when Hillcrest Comedy truly started to be in the works after being considered, and today Johnson is on contract with them for the series.

While Hillcrest and Martini’s tends to very much cater to a LGBT community, Johnson aims to include entertainers and comedians of all orientations, backgrounds, ethnicities, etc, which in turn creates not only a truly upbeat show, but a diverse one. Johnson demonstrates how she is  hard-working and humble individual in her efforts as much as she is entertaining. “I’ve learned a lot in beginning this series. It’s all new to me – the constant promoting and work that goes into it. It can be very hard at times but I am learning so much,” enthused Johnson. Johnson’s consistent hard work, practice and not giving up in the scene of comedy is slowly but surely started to pay off for her and put her in the spotlight.

Each Hillcrest Comedy show that I’ve been to -the first and this last one, has only brought forth exuberant laughter, joy, and entertainment to me. What is better than a variety of comics and a delicious martini? Well, sign me up! Here below are some photos by me of the super talented & diverse cast of this last show. Each one of them had something different and amazing to deliver! 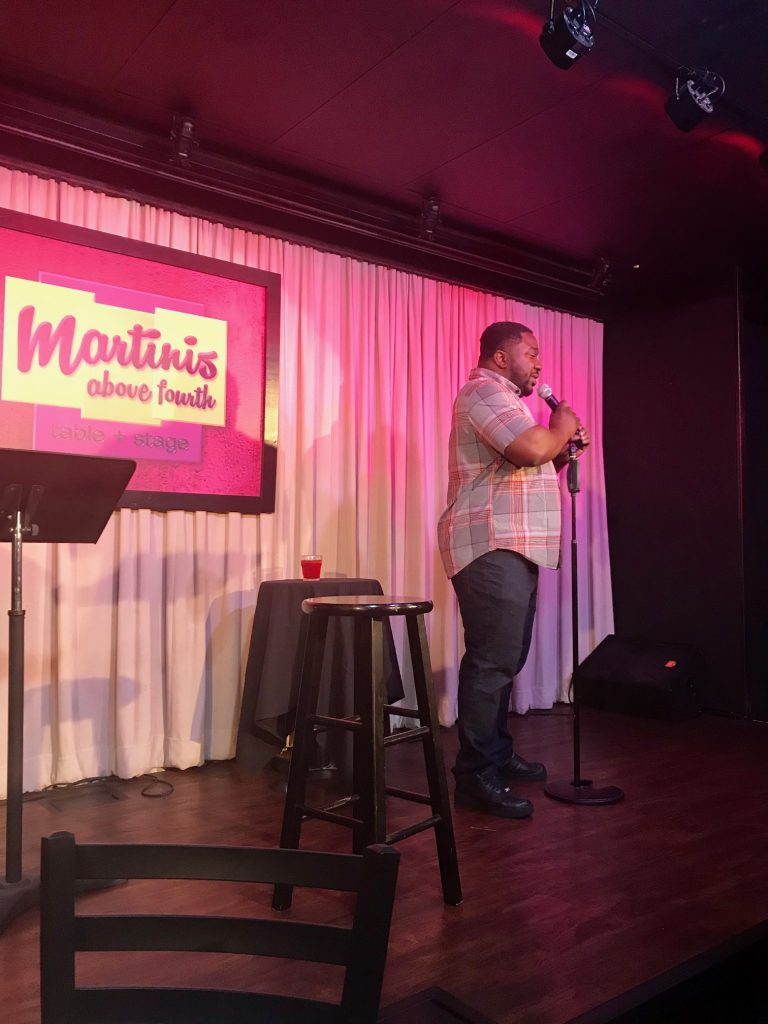 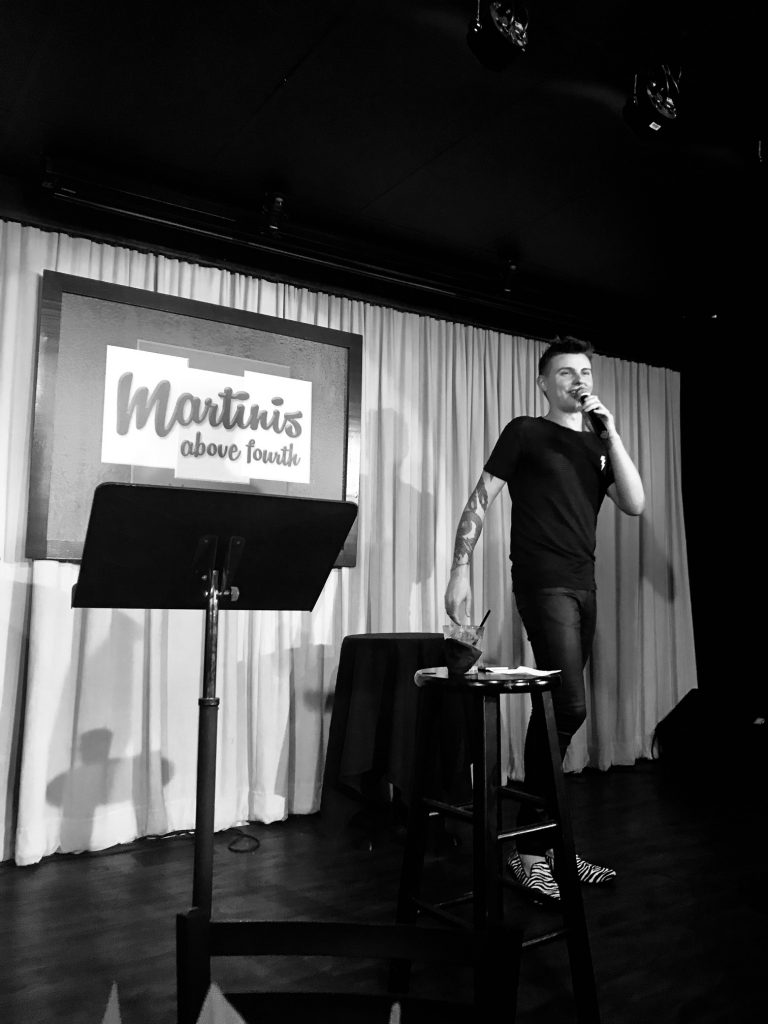 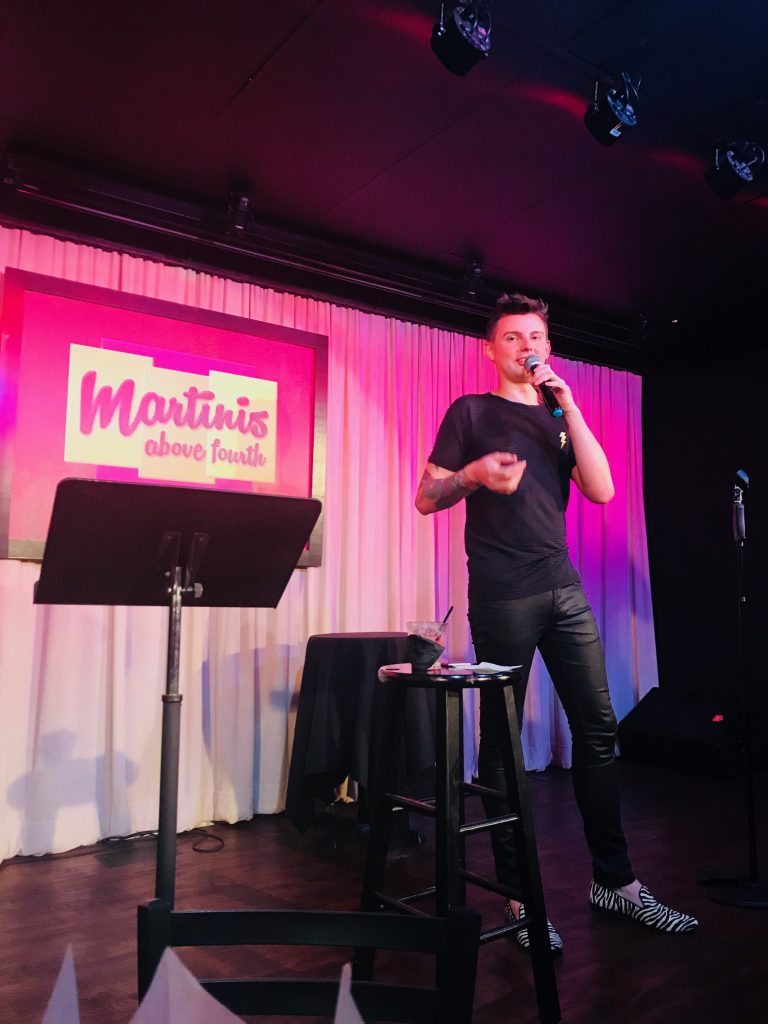 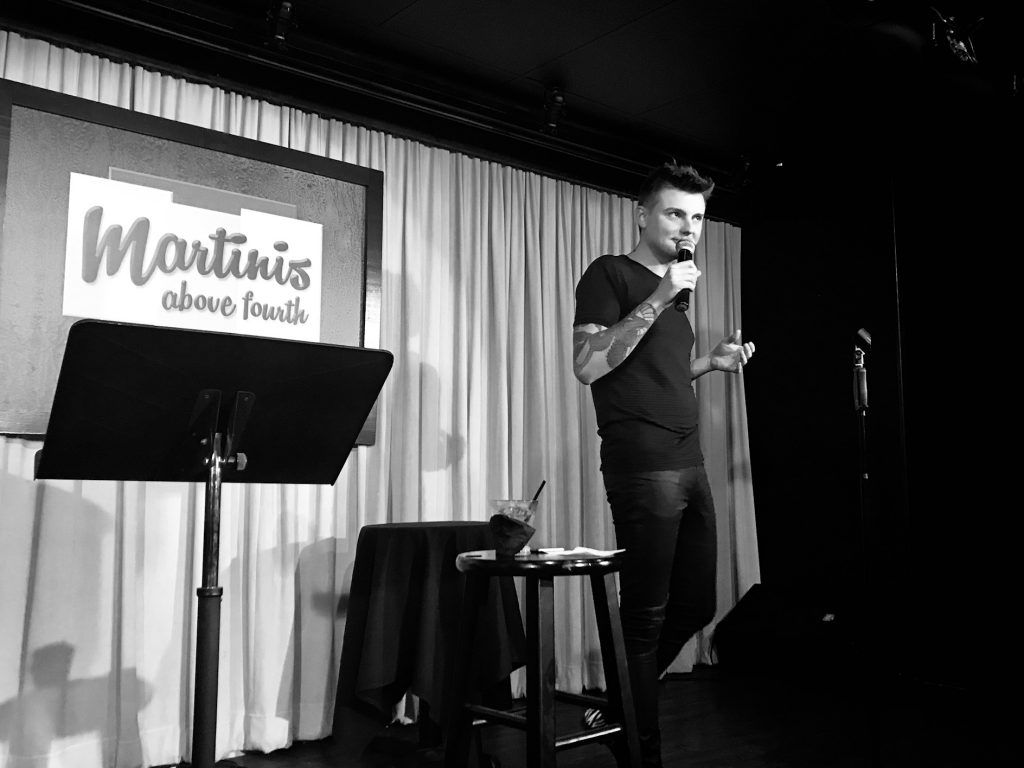 The wickedly hilarious Brandon Potter, who just always gets better with time! 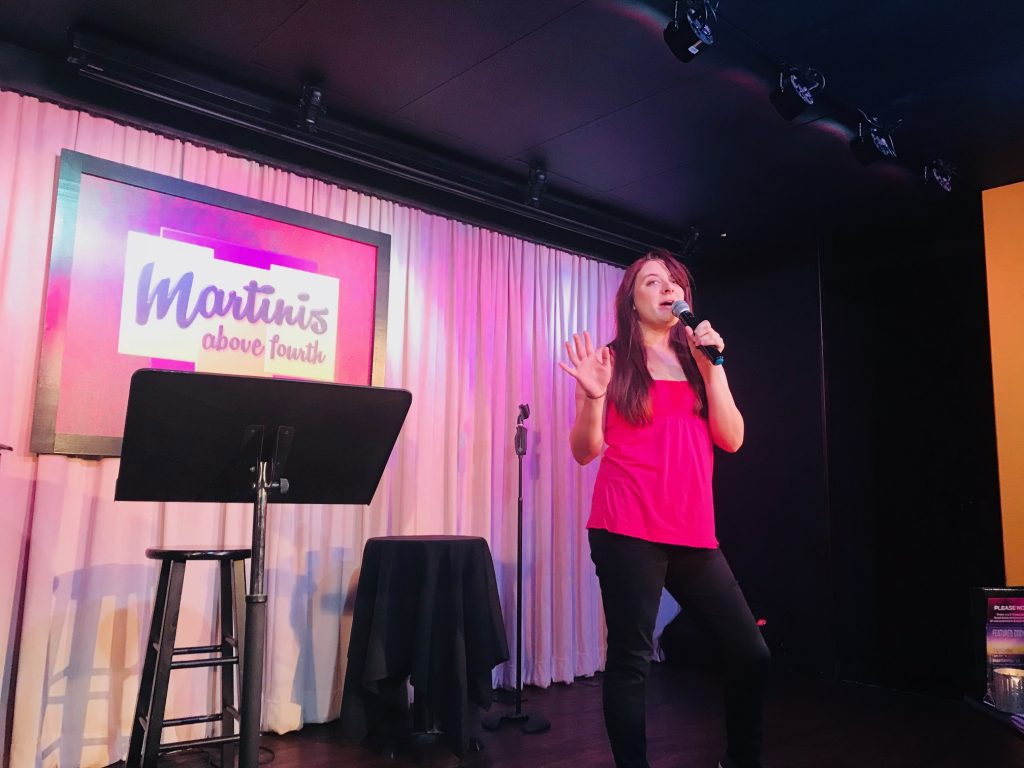 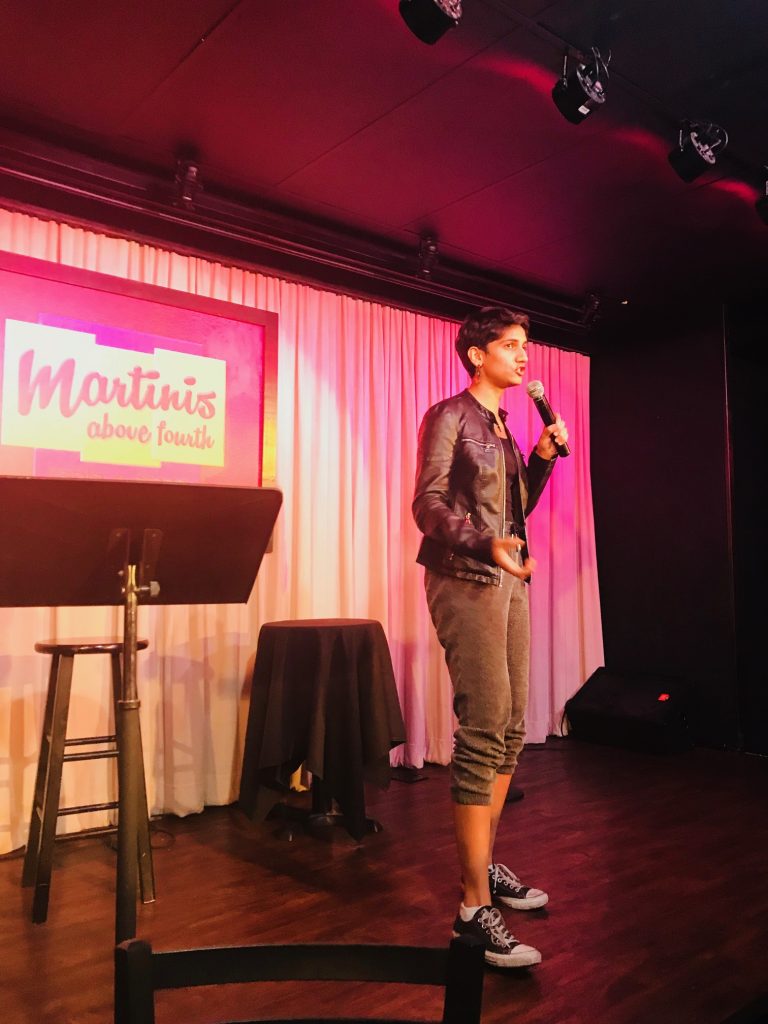 Pallavi Gunalan. Both above ladies were super amusing! 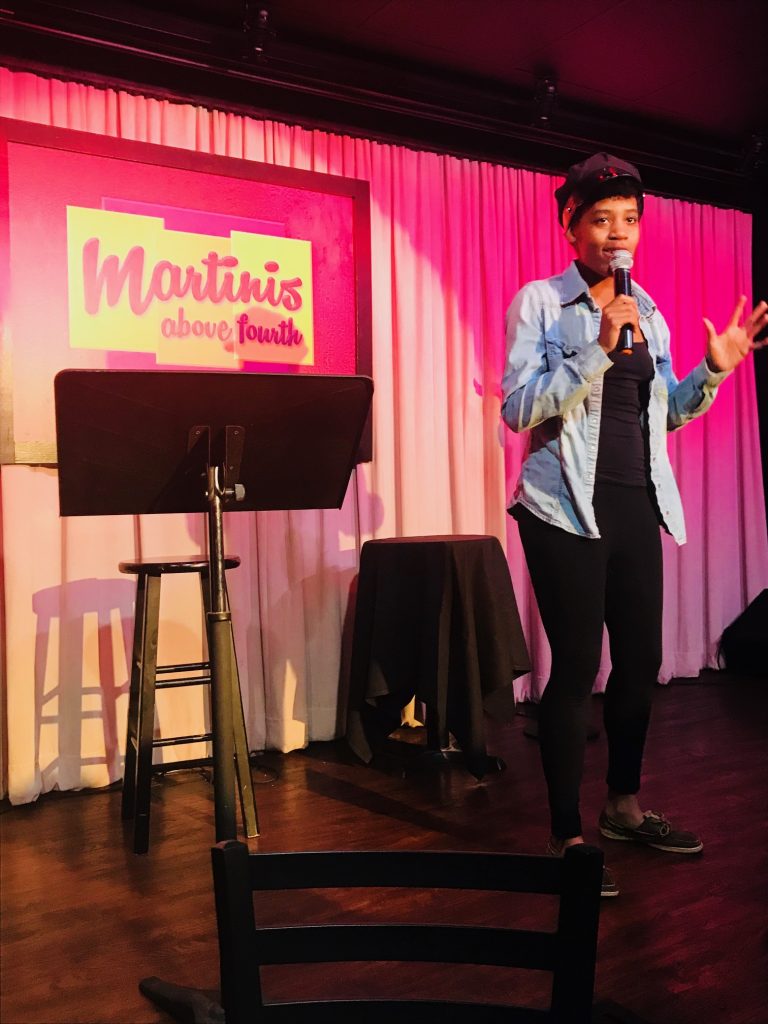 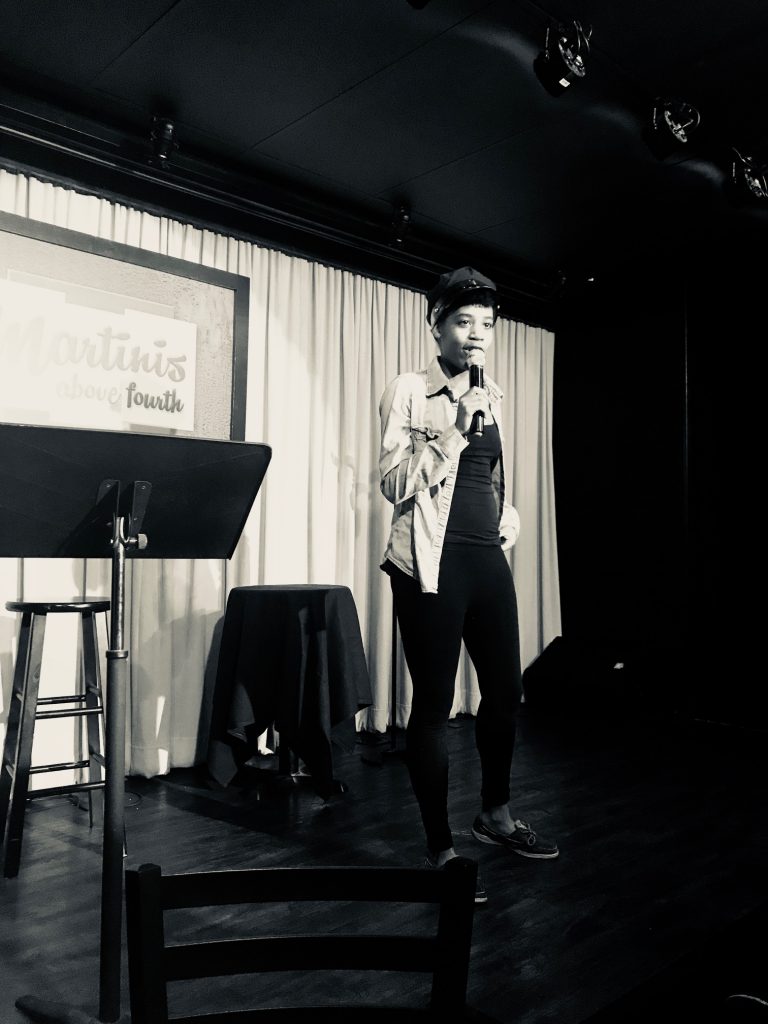 Hillcrest Comedy With Jaleesa Johnson is a great new addition to the line of diverse entertainment at Martini’s Above Fourth. Martini’s will be blessed to carry it. I highly recommend any San Diego natives, or people visiting San Diego, to definitely check it out. The next show is April 17 – be sure not to miss it! Like them on Facebook to follow on the events and get tickets!

Be Merry, and Laugh!

Hi! My name is Jennifer Ferrada and I welcome you to my blog. I am so happy you are here. I am 33 years old and from Los Angeles, California, but currently based in San Diego, one of the most beautiful cities I've come to known. Feature writing is my passion, and only just recently I've been able to get back into it again. I hope to become a successful feature writer of sorts some day - whether it be for a popular food magazine, a travel magazine, or a lifestyle and health magazine. I have a pretty open mind! I would not even mind if I get the opportunity to write for a space news magazine -- the universe and astronomy is one of my favorite subjects. The reason I have decided to become a feature or lifestyle journalist is because ever since I was a young girl, I remembered loving reading CosmoGirl! and reading inspiring, real-life stories or advice columns that empowered young women. I love reading about people's crazy adventures in Reader's Digest. I love reading about art, entertainment, travel, nature, food, relationships, animals, inspiring and empowering tales. I was the features editor one semester for my high school newspaper and after high school I went ton to write for The Corsair at Santa Monica College for a year. My story is that I know I am always improving as a writer. Currently, my goal is to become better at food reviews because I am such a foodie in this life! By having this blog, I hope to continue towards my dream and also hopefully one day, helping inspire other writers out there. Most importantly, I genuinely want to get the good word out there -- on the interesting and fun things that life has to offer -- whether it's a gnarly seafood restaurant, an amazing cup of coffee, or a band's new album that you must absolutely check out. Au Courant is french for "stylist and current." My goal is to help you become aware about the newest information and trends in lifestyle. I hope you enjoy your time here! Xo, Jennifer